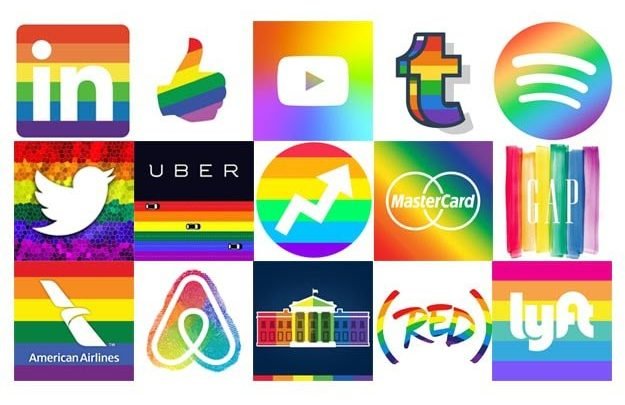 It’s Pride Month! All over the country, there are Pride parades, festivals, and other special events to celebrate the LGBTQIA+ community throughout the month of June. Companies are jumping on the bandwagon with special merch, different logos, and celebratory hashtags. But many are wondering if brands are just capitalizing on Pride Month.

In late June 1969, the Stonewall Riots took place as a response to the police raid on the Stonewall Inn, an underground gay club in New York City. The riots lasted six days and united the LGBTQ community. These riots ignited the Gay Rights Movement which continued on through the 70s alongside the Women’s Rights Movement and Black Pride Movement.

The rainbow flag is the symbol of LGBTQ pride and each color represents something. Specific groups within the community have different flags with different colors to differentiate themselves. Rainbow flags signify spaces where LGBTQ identities are welcomed. During pride month plenty of brands change their logo to incorporate the pride rainbow. Brands like Mac Cosmetics have created special hashtags such as #MAClovesPride. Facebook and Chipotle, like many others, even have floats in Pride parades. Clothing and shoe brands like Converse, Banana Republic, and Under Armour are offering special edition clothes and shoes for Pride month that prominently display the rainbow.

While brands rushing to incorporate the rainbow seems like an embrace of the LGBTQ community, many members are questioning and criticizing this sudden attention. Some brands are showing support for the LGBTQ community during Pride Month through merchandise and hashtags but fail to do so for the rest of the time. For example, Victoria’s Secret has a Pride Collection but their Chief Marketing officer, Ed Razek has stated that they will not feature a transgendered person in their fashion shows or campaigns because it does not fit into the fantasy. Another criticism is that a lot of these companies are making special pride collections or special edition pride merchandise yet are not using the profits to do anything that benefits the LGBTQ community. As well as companies that are participating in Pride Month while supporting politicians who back anti-LGBTQ legislation.

The good news is that not every company is using Pride Month as an opportunity to capitalize on this community! Newsweek has compiled a list of over 50 brands that are giving back to the LGBTQ community during Pride Month. Pride Month is also a great time for individuals to take in upon themselves to donate or advocate for issues that are prevalent within the LGBTQ community. You can donate resources or volunteer at LGBTQ centers that serve homeless LGBTQ people, volunteer or donate to the movement for equality across sexual orientation and gender identity or join the effort to lower the suicide rates amongst LGBTQ youth.

Our logo is a firefly! It’s an enigmatic creature, treasured for its magical power to glow. This is what drives us at Luminoustudios - a certain magic that sets free endless creative possibilities.
When we send you a cut, you can click directly on the video to make comments. It couldn’t be easier!
We offer video packages if you are looking to do a series of ads.
We deliver videos in all formats, vertical videos for insta stories & 1:1 for social media ads.
We have a 100% success rate with our crowdfunding videos. Every campaign has surpassed its goal.
We’ve produced over 150 videos in the U.S.
We film most of our videos on the gorgeous RED Camera with 4K resolution.
We can deliver videos fast - as quick as 7 days!